Where was the first Gold Rush? California? If asked that question during your local pub trivia, the answer is Dahlonega. The Dahlonega Gold Rush was the first American Gold Rush. I learned this, and the geology of Georgia that produces gold alongside veins of quartz at the Dahlonega Gold Rush Museum.
We had one hour before the museum was closing and the gentleman who greeted us very generously made sure we learned and saw it all during that hour.

Now the museum contains relics from gold mining, even a submersible “tank” that was lowered to the river bottom, containing two miners who would work the river bottom until their oxygen ran out. The submersible was shrouded in mystery as it was discovered in the 1980s at the bottom of a river, and there were only trace records of this unorthodox and very unsafe, and wild way to mine for gold.
I digress though, the museum is filled with relics, and a display case of the minerals and gems of Georgia. This is for the rockhound to see examples of the veins of quartz that can denote gold in that there hill. The case was 4 shelves of beautiful specimens of gems found in the area, and pictures are below.
The tour begins with a 17 minute movie, worth the nominal admission price alone, and for the numismatist in the group, there is a collection of coins minted at the Dahlonega Mint, that at today’s price of gold, which is much lower than early 2014’s spike in the price of gold, they remain worth 3 quarters of a million dollars.
The Dahlonega Gold Rush Museum has cafes, restaurants, antique stores, bars within walking distance. The museum is in the town’s center as it occupies the old Courthouse. Ask the Ranger on duty about the history of the Courthouse and ask to see where you can see the gold flakes embedded in the local brick with which the Courthouse was built.
Thank you to the Ranger who answered our questions, and shared his insight about the history of the Dahlonega Gold Rush.
“There’s gold in them there hills!” 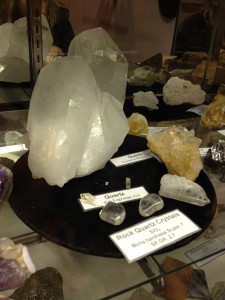 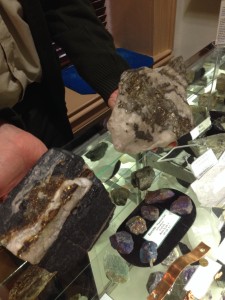 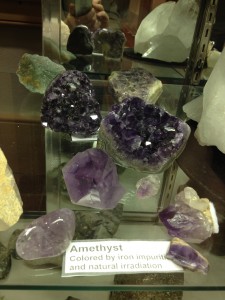 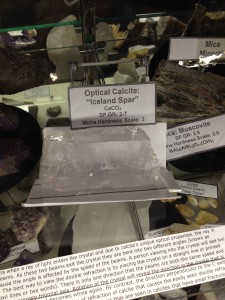 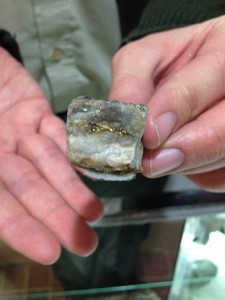 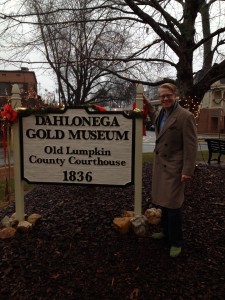