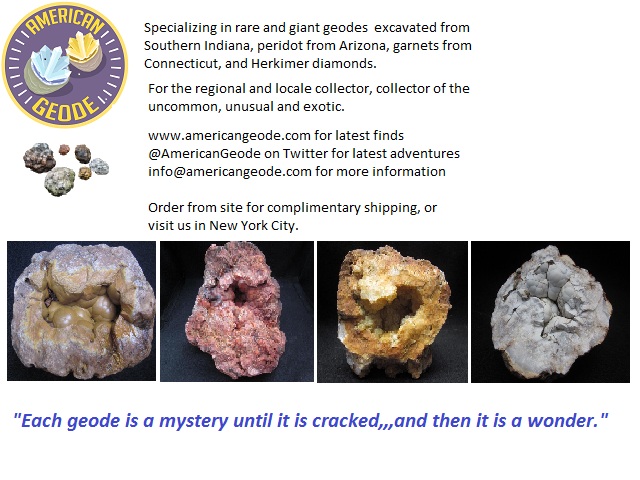 Now the source and formation of Herkimer Diamonds is of particular interest to us here at American Geode because the Herkimer Diamond was formed in “pockets” not unlike the pockets that formed geodes. Most quartz crystals grow, over the course of millions of years attached to a matrix, attached to the surrounding rock or stone. So in those formations only one end of the quartz crystal grows to its point. With Herkimer Diamonds forming inside pockets, freed from the surrounding matrix stone, they grow points on both ends.

The Herkimer Diamond began forming nearly 500 million years ago in pockets within a sedimentary rock called Dolostone (Dolomite and Limestone). Sedimentary rock, different from its two cousins Igneous rock and Metamorphic rock, is formed by layers of mineral and organic matter under hundreds of million years of pressure. As more layers of mineral and organic matter are deposited, this increases the pressure and weight on the lower and earlier layers of sedimentary rock below. The Dolostone covered Herkimer County during the Cambrian Age, when Herkimer County was also the bottom of the sea that spanned across North America.

Now this is the part of the Herkimer Diamond formation that is similar to the way geodes are formed: organic material, plants and sea life would die and be buried under new layers of sedimentary stone. When these plants and other sea life would decompose under the rock, they release gases, and this gas is what formed the “pocket.” Evidence of this organic, plant material succumbing to decomposition is clear when you see the black shiny flakes of Anthraxolite that surround or leak from these pockets. Anthraxolite is a carbon compound and by-product formed when organic material breaks down.

So as the organic material decayed and broke down it became a gas, trapped below layers of sedimentary stone. Air creates its own pressure inside a substance, so the air pressure was carving out its own cavity from the inside out. These air pockets became the pockets we rockhounds discover as we crumble, break, and peel away layers of the dolostone. Over the course of 200-250 million years the layers of sedimentary rock increased and grew, and this increased the pressure and heat on the buried dolostone. Also inside each of these air pockets were various quartz and carbon elements and other compounds “feeling the heat” from being buried below layers of sedimentary rock.

Under this pressure of the sedimentary layers of rock, and the ensuing heat, the quartz and other compounds inside these pockets began to transform themselves. Finally, over the course of 300 million years, the glaciers that sat atop Herkimer County began to melt, and washed away layers of the sedimentary rock, and allowed the compounds and elements inside these pockets to cool down and then crystallize.

An important question to answer right now is “why are the Herkimer Diamonds double-terminated?” The answer is that quartz does not adhere to the dolostone, therefore the quartz trapped inside these air pockets did not attach to the surrounding matrix host stone. The process left the quartz crystals free to fully crystallize unattached and allowed both of the ends to grow into fully terminated points. Many Herkimer Diamonds are found as clusters attached to one another. They adhered to one another during their crystal growth formation, but again did not adhere to the dolostone interior of the air pocket. The value of Herkimer Diamonds is determined by size and their opacity or translucence. The larger and more translucent Herkimer Diamonds are worth more to a collector or jeweler than the smaller opaque specimens. Knowing the history and background of the Herkimer Diamond however lends a premium in our opinion when you are considering adding Herkimer Diamonds to your collection. They are not commercially mined due to various New York state laws limiting mining in the state, and most of Herkimer County is being used today by happy grazing cows, sugary apple orchards, tart cherry trees, farms of squash, cabbages and onions, and wine grapes. We have recently gained access to heretofore unmined and barren acres in the Herkimer County area on the same geologic slope and ledge as the traditional Herkimer Diamond mines. We are in consultation right now with the owner about constructing a pole-barn over this new Herkimer mine so we can mine year-round.