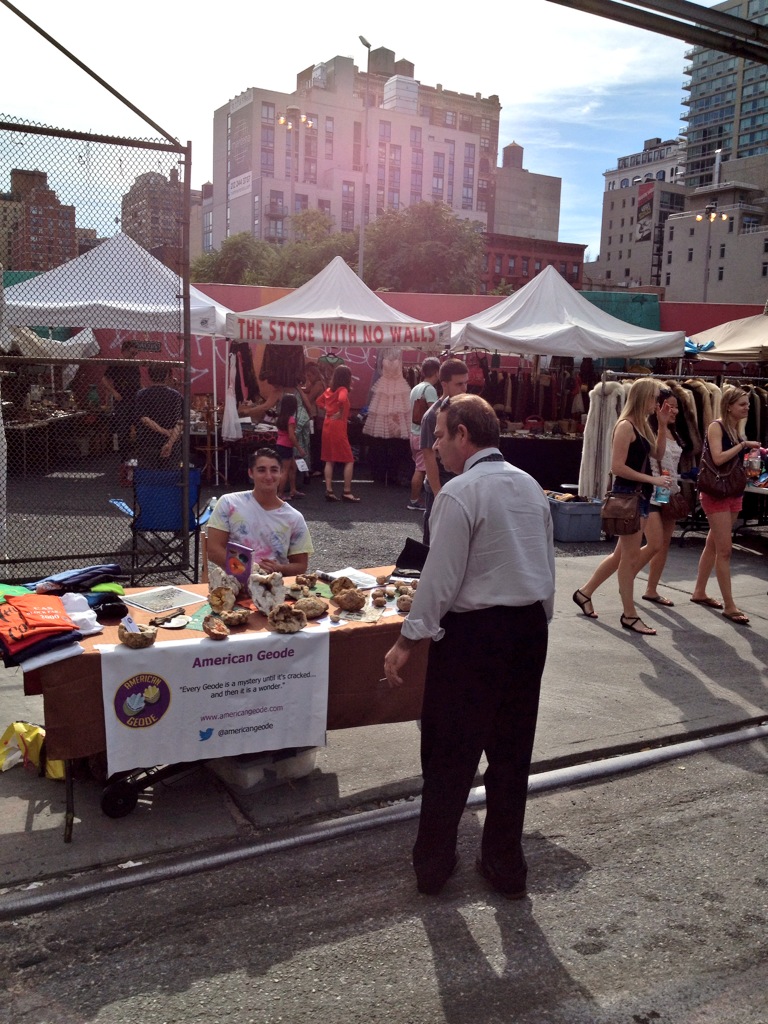 With December 30, 2018 closing of the Hell Kitchen Flea Market, American Geode wanted to share some stories about our time at the famous flea market.

The buyers, early birds really, start arriving at the flea market around 6am, just as the flea market dealers are unloading. This way the buyers can get good deals, and ask for a discount in return for buying a piece before the dealer ever has to set up their table. One time American Geode was setting up, and a dude dressed all in black, who looked like he was returning from being at one of the clubs all night, walked by our table. I think the guy was tripping, or wigging, or rolling by the looks of his eyes, and his acute fascination with geodes.

He asked dozens of questions, and followed our answers by replying “Cool!” Finally, he said “How much?” We said $20, and he grabs a wadded up, rolled up $20 out of his pocket, hands it to us, picks up a golf ball sized Indiana geode, and continued down 39th street, to 10th avenue. I am fairly certain that when he woke up early that evening, and he found a round rock in his pocket, and a missing $20, he is going to wonder what the hell happened.

At another flea market day, we had something special in addition to our classic Indiana geodes for the crowds. We had a large taxidermy bear, intact from the waist up, with both paws extended in “attack form,” and a growl on the face of the Cinnamon Bear from Canada. A gentleman came by, interested in it, and started telling us that he recently broke up with his boyfriend, and he wanted to complete remodel his apartment to look like a Victorian England parlor. The Victorian England parlor style is filled with many different objects of curiosity and rarity. Think the parlors where Sherlock Holmes lived and worked on cases!

The gentleman had no way to carry it back to his apartment however, so we figured we had shared a fun, and funny conversation with a nice New Yorker, and left it at that. About an hour later however, the gentleman returns with one of those giant blue plastic and fabric bags from Ikea. He was able to fit the bear halfway through the bag, enough to sling it over his shoulder, and we watched him proceed to walk down 39th, toward 9th, with a growling bear sticking out of his bag over his shoulder!

American Geode will always remember our time at the famous Hell’s Kitchen Flea Market, a memorable, historic institution that we are sad to see close down, but thankful for the memories, and the help getting American Geode’s gem, mineral, geode, fossil, and curiosity business off the ground!