As a precaution for Covid masks will be required for admittance.

The show will feature 23 vendors with a wide variety of jewelry, fossil and mineral specimens, meteorites, gemstones, and decorative objects. There will also be educational activities and gem and mineral ID tables. Admission Adults: $6.00 Run of Show Pass: $10.00 Children Under 12: Free 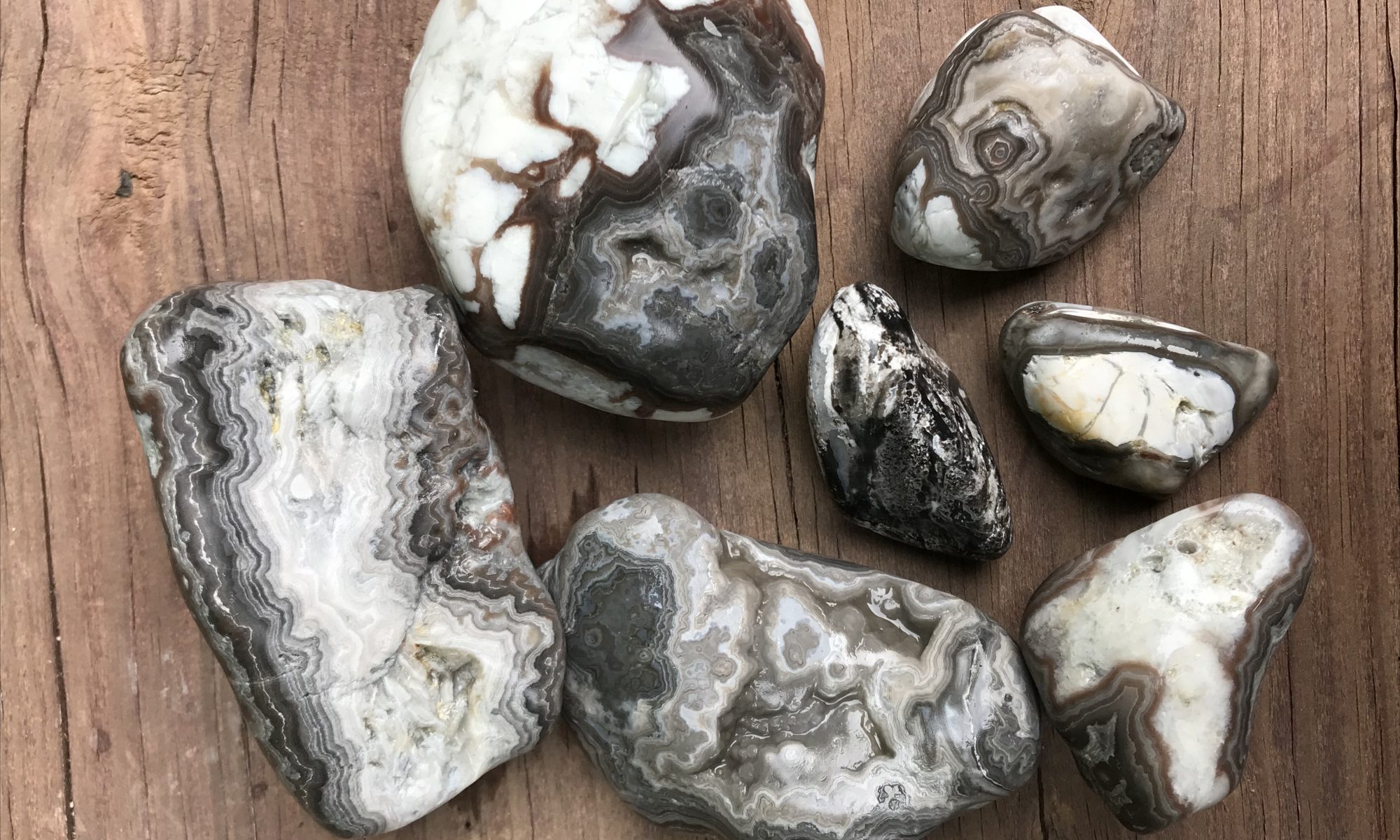 Through one of the gem and mineral clubs to which we belong, we were invited to rockhound for lace agate, banded agate, moss agate, and druzy quartz from a private mining site near Summerville, Georgia.

I arrived and was lucky to have the entire mining area to myself except, over the course of the morning and afternoon, 2 different couples stopped by to collect agate, and a family was out on a rockhounding trip.

American Geode takes that attitude that if you can, take a lifetime supply. We filled up every bucket and bin we brought, and also picked up many large and heavy agates. The stone was plentiful. The only time we used our tools was to break apart a behemoth stone into more manageable sections. We found moss agate, lace agate, banded agate, and our favorites had druzy quartz pockets.

The beauty of these stones were not easy to see without being splashed with a little water, but we ran out of water, so started collecting more than enough to overcompensate as we expected to have some stones better suited for the garden. On a recent gem and mineral meeting over Zoom, when I was showing off these fine agate specimens, I learned that the agate, and the stone formation containing covers a lot of Northwest Georgia, even into Tennessee, but it is on private land, or federal park land, so not available or accessible to the general public.

This agate tumbles well, but it loses a lot of surface area during the tumbling. It is beautiful however, and we are sure that a cabochon or lapidary person would have even more fun with this agate.

We are selling this agate here: https://www.ebay.com/usr/americangeode

We have been tumbling North Georgia river stones, and most recently the Summerville Agate, in a 20lb barrel from MJR Tumblers. Each stage of tumbling takes about a week, and at the conclusion of each tumbling stage, I have been dumping the grit and the agate and river stone grit into the flower garden. The flowers LOVE IT! The rose bushes are more plentiful than ever before, and deeper colors than they were last year. One small rose bush that was red last year, was almost tie-dyed looking with streaks of white. The red impatiens are now a shade of orange. The mint and parsley plants are overgrowing! While this is not fertilizer, I can only guess the plants appreciate this concentrated mineral content in the otherwise mostly red clay soil. After I do dump the tumbling grit sludge into the garden I dilute it, and that happens naturally because I need to clean the tumbling barrel before the next stage, and also need to rinse thoroughly the stones before starting the next tumbling phase, or polishing phase, so I am hosing down the barrel and stones over the garden too, and that helps dilute the sludge and make it run over more of the garden to be soaked up.
I am sure that the sludge mix from a cabochon workstation would have the similar effect on your outdoors flowering plants. Never dispense of tumbling or cabochon grit down a drain, and no never, dispense of that valuable mineral sludge, but add it to your garden. For any questions about gardening, or rock tumbling, feel free to contact Charles at charles@americangeode.com.

Hope this is helpful!

I had been looking forward to this fossil trip sponsored by the Georgia Mineral Society for the chance to find tetrapod tracks. I was familiar with ferns, branches, and other vegetation because I had gone to Carbondale and Centralia, Pennsylvania sites of old strip mines, and collecting through the shale and slate, had found many fine ferns and fronds. This was the first chance to find real critters! Of course, I knew that if I made a breakthrough discovery that it would need to be shared with the Alabama club, and respective university and state agencies, but I would be happy with that for a breakthrough discovery.

I arrived the night before and stayed in Birmingham. All I needed was a place to sleep and shower, so I found a cheap hotel near downtown. How cheap was it? Let me put it this way, the night attendant was behind bullet-proof glass. I made it in great time however, somehow avoided the regular and horrific traffic around Atlanta, so I had time to step out in Birmingham that evening. I had my first post-covid margarita at a fine place that followed COVID protocol and then a night-cap at an establishment called Collins Bar. I recommend Collins Bar because their main decora is a huge mural of the entire wall behind the bar of the Periodic Table of Elements. So, while you are sipping a drink, you are quizzing yourself, or others on the Periodic Table!

The next morning, I met the field trip leaders at the nearby Walmart for sign-in. I have said this before, I wonder if Walmart appreciates that they are the universal meeting site of most gem, mineral, and fossil society field trips? If they did, they should offer early Saturday morning sales on gloves, chisels, hammers, and prybars.

We carpooled to the fossil site, formerly known as the Union Chapel Mine, and now also called the Steven C. Minkin Paleozoic Footprint Site. The area is large and full of slate and shale, to turn over, crack, split in half, and examine closely. The site sat on an ancient marsh, so is full of Pennsylvanian Age plant fossils, ferns, fauna, and tetrapod tracks and other vertebrates. The abundance of fossils, and the abundance of variety make this former coal mining site one of the most significant fossil sites in the world. In the 1990s, the grandson of the owners of the coal mine brought some examples from the mine to their high school science teacher, who recognized that these were something special. The teacher was able to visit the student’s family’s mine, and recognized the significance of the tetrapod tracks, and abundance of flora, fauna, invertebrate, and other fossils, and shared the information with the local paleontology club, word spread to professional paleontologists, the university, and the state. Now through a collective partnership of private and public, state and academic, the site is preserved and protected for fossil digs by academics, researchers, and fossil clubs.

The labor is not intensive unless you want to crack and pry apart larger shale and slate pieces. There is a lot of material on the surface for collecting and examining. There are cliff walls to one side, but that area is off limits. Past visits had yielded tracks, and we were told of someone’s discovery of the tracks of a giant scorpion. During the dig, I had the good fortune of seeing others’ finds that included burrows of insects, many broken branches, twigs, and other tree parts, and potential tracks. My personal finds included an almost 12 inch branch in a large plate, some plates with broken bark, twigs, and branches, and some interesting plates that had gas bubbles that I learned later were marsh bubbles – not the most exciting find, but fascinating to think that marsh bubbles were preserved in situ like that. At the follow-up Zoom show-and-tell, some fellow members had found tracks, where you could see the claws, and the back and forth motion of the crawling creature.

For future visits, be sure to take plenty of snacks and water. While the area is adjacent to where you park, the nearby gas station, or Walmart are far enough from the remote location that your limited time and access to this special place would be compromised if you were leaving for snacks or drinks. There is no shade, so be prepared with sunscreen.

I did engage in a conversation with members who noted that if some of the surface stone were moved with a bulldozer, and just 5 feet lower were exposed, that there would likely be new, and potentially breakthrough discoveries to be made. This was an excellent trip however, well organized and coordinated, and I am hopeful to return. For other fossil stories, and especially geode hunting and geode cracking articles, please find other articles at http://www.americangeode.com .

All military & their dependents free.